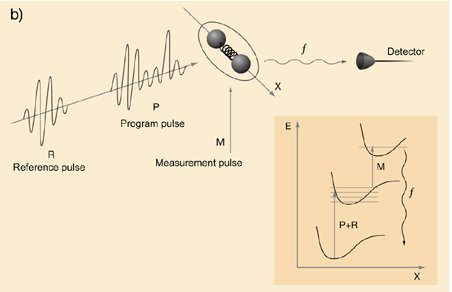 A demo of a quantum calculation carried out by Japanese researchers has yielded some pretty mind-blowing results: a single molecule can perform a complex calculation thousands of times faster than a conventional computer.

A proof-of-principle test run of a discrete Fourier transform — a common calculation using spectral analysis and data compression, among other things — performed with a single iodine molecule transpired very well, putting all the molecules in your PC to shame.

Using quantum interference – the vibrations of the atoms themselves – the team was able to run the complete discrete Fourier transform extremely quickly by encoding the inputs into an optically tailored vibrational wave packet which is then run through an excited iodine molecule whose atomic elements are oscillating at known intervals and picked up by a receiver on the other side. The entire process takes just a few tens of femtoseconds (that’s a quadrillionth of a second). So we’re not just talking faster data flow or processing here; these are speeds that are physically impossible on any kind of conventional electronic device.

But don’t trade in your conventional computing power just yet. Like other quantum information platforms, molecular computing is in its infancy; we understand some of its mechanisms, but it’s difficult to execute and there are still a lot of unknowns. Further, researchers aren’t quite sure how they could integrate such technology into something that works the way we’re used to our computers working.
Still, the very fact that researchers were able to pull off a calculation at such speeds shows just how big of an impact molecular calculations could have on the science of computing.

A strong believer of: 1. Knowledge is power 2. Progress comes from proper application of knowledge 3. Reverent attains wisdom 4. For one's own salvation, and for the welfare of the world View all posts by Sreejith